There are times where I wonder what I’m going to write next for this blog, and then, there are times like today – something totally insane happens, and I have no doubt about what I’m going to write next. Still, I’m very picky about what I put on here – I refuse to post mundane details about my everyday life – one of my most important rules. The only exception to this rule occurs when I feel a particular story could be entertaining, and make people laugh. If I consider it a funny story, then I’ll put it up. This is one of those stories.

A few days ago, while eating supper, I felt a pain when closing my jaw – it originated from a particular tooth.  I was able to trigger the pain every few tries, and I thought I chipped it in some way, maybe revealing a cavity or something. With this in mind, I looked for a new dentist in my area. Since I’m a fan of user reviews and ratings, I felt I should start by considering those that had positive reviews. Google Maps is actually pretty good at this – I found two local dentists with 10+ ratings, most of which were positive. I called the one with the most positive ratings, and set an appointment – it was today at 1:00pm. I had them schedule a cleaning, and afterward, a check-up with an extra slot for a cavity repair, as I figured I had one.

When I went to my appointment, everything seemed to be going OK. The woman doing my cleaning was actually a great person to talk to, and she didn’t mind answering my questions. After examining and cleaning my teeth she was able to spot a potential of 4 (yes, four) cavities. I was a little freaked out, and I was hoping the doctor himself would clarify this – maybe she was wrong about 1 or 2 of them? What you need to understand is that at one point in my past, about 2 years ago, I was told I had 7 (yes, SEVEN) cavities – and I was totally shocked. Prior to being told I had 7, I always brushed twice a day, and used Listerine daily. After explaining this to my dentist, I was told that floss was probably the missing element, so I fully accepted flossing every day – hell, I even started flossing twice a day, to be safe. Knowing I’ve been flossing 1-2 times a day, and brushing 2 times a day, I never expected to have more than 2 cavities. So here I was, at a new dentist, and this girl was telling me I might have 4 new cavities. I was, again, a little shocked, but I thought she knew what she was doing – so I waited until I saw the dentist, I figured he would confirm it.

The dentist proceeded to examine my teeth, along with another assistant (not the same girl as before), and I immediately noticed he was a pretty cool guy to converse with as well – reflecting what I read in the reviews. While he was working on my teeth and gums, I noticed a few weird personality traits, and they led me to be concerned. The first one happened when he poked at something – and I said “ow” and asked him what he did. He said that he simply poked at my gum, and that I overreacted. Overreacted? Excuse me? If it hurts, I’m going to react accordingly. That was the first sign that this guy had some quirks. I also began to notice that he worked very fast, and seemed a bit hyperactive – he didn’t waste any time at all. I sensed he was beginning to get a little impatient with me, when I didn’t reply quickly enough to his queries and directions. I was still fine with all this – I thought the guy was a little weird, and that was fine by me. The next thing that raised a flag was one point where he stopped working and said “What’s wrong with you? You seem to be really nervous, at least in your mouth area – the rest of your body seems relaxed.” I just shrugged that one off, but I knew that this was primarily because of his overall speed and brewing impatience. Still, despite these little weird moments, I still had nothing against the guy – at least not at that moment. He went on to tell me that I’d need 6 (yes, SIX!!!) cavities repaired. Oh, not only that – he felt I would need braces too, and that I should start using dental guards again – when I sleep. My reaction to this was along these lines: I thought it was ridiculous that a guy that took care of his teeth as much as me would have 6 cavities, but I accepted it. The braces – I wasn’t looking forward to it, but his arguments made sense – if I needed braces, I’d get braces. Whatever. The dental guard – again, not a problem for me. If I needed to wear it at night, then I would – no problem. The cavities were the biggest shock here, as I thought I had corrected my problem when I began obsessively flossing. I really want to point out that I didn’t doubt his professional competency – I was just shocked with the results.

Now, here’s where it got complicated. I was scheduled to get a cavity repaired, but I was a little shaken when I was told I had to get 6 repaired – 3 today, 3 another session. The doctor asked me which side he should start with, so that he could start right now. I felt like I was being rushed, and told him I’d like to have some time to think, as I wasn’t expecting so many cavities – it was a shock. He told me something along the lines of “You’re procrastinating, just choose – and we’ll get to work”. I then said I rather wait a couple days, and then come back. He said something along the lines of  “If you choose that route, that’s where it ends. You had an appointment, and now you’re forfeiting it – we’ll have no way to fill it.” I couldn’t bring myself to believe that the doctor would abandon me as a patient just because I wasn’t feeling up to doing it immediately, so I told him I was sure I wanted to take that approach, again, because I was feeling a little overwhelmed and rushed. He said it was fine, and went into his office. I then went to the front desk to pay for my dental cleaning, and as I was filling up some sheets for the secretary, the Doctor’s assistant came up and said, to the secretary, “You’re not supposed to give him another appointment.” At this point, I was hit with the truth – but I still couldn’t believe it, so I went to see the doctor – and sure enough, he said that I was banned from ever coming back. He said if I was regular, he’d give me another chance, but since I bailed on him in under 24 hours, he didn’t feel he should keep me as a patient. He felt this compromised my integrity, and believed I would do it again, wasting more of his time. I tried to explain to him that this was the first time I ever behaved in that manner, and then just gave up and said: “Alright, man. Your decision. Bye.”  I was also told that my papers could be faxed to another dentist, at my request. I didn’t see the point in dealing with the dentist beyond that point – he made his choice, and if his was so insistent on making me his bitch, and rushing me through it – then I could surely find a more understanding doctor. I paid for my cleaning, and then left the place – evidently, for good. 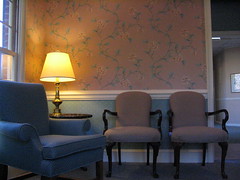 Looking back, I can’t help but laugh at this experience… but at the same time, I’m really taken aback at how rough of a doctor that guy was – I’m not referring to his work, more so his human interaction skills, or lack of. I felt rushed, and a little overwhelmed with the news of 6 cavities. I was perfectly willing to get them fixed by the same doctor, but he was obviously offended that I was going to postpone the “repair” appointment. A little strange too – I was there for my main appointment, it’s not like I completely bailed on them. If I was told in advance he reacted so brutally to such a “cancellation”, I would of probably decided to go elsewhere. He couldn’t get it through his head that I simply wasn’t mentally well with doing it so quickly – some people would need even more time than me, but apparently those people are destined to be rejected by that doctor. I thought to myself, while there, how he would be with kids – how unfortunate for them… having a father that lacks basic human understanding and compassion. I’ll rate him according to my experience on Google Maps and probably RateMDs.com. Also, at least now – I can get a second opinion about the work that needs to be done – if I said that as my excuse for wanting to cancel my second appointment, he probably would of banned me for that too. How is that right?

Update: Rated him on Google Maps, and RateMDs. His name is Jean Pierre Loiselle.